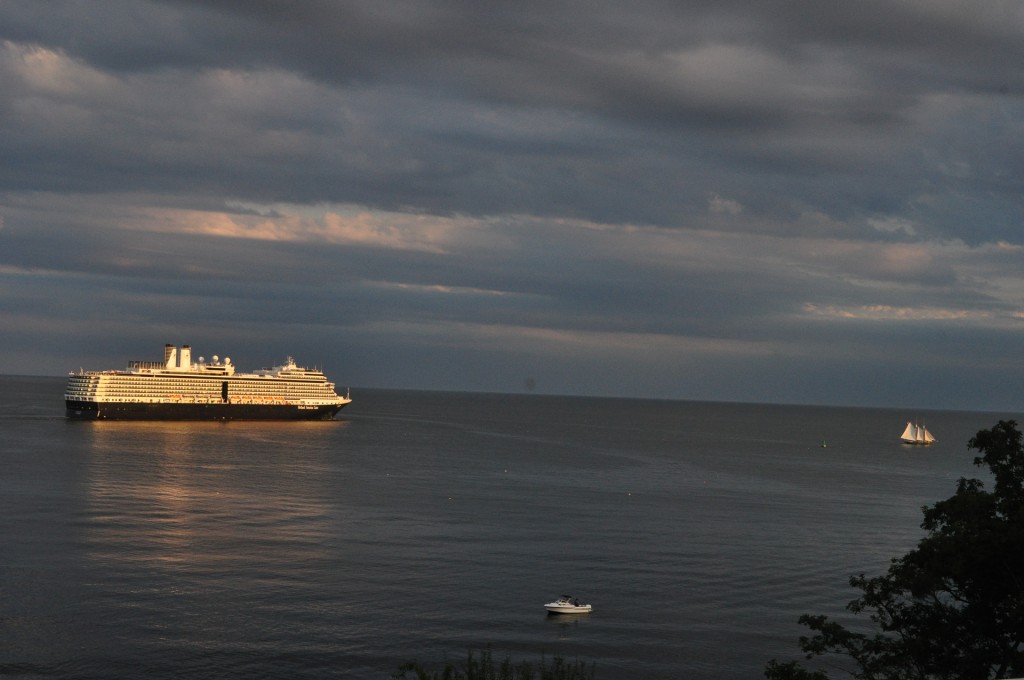 23 Some went down to the sea in ships,
doing business on the great waters;
24 they saw the deeds of the Lord,
his wondrous works in the deep.
25 For he commanded and raised the stormy wind,
which lifted up the waves of the sea.
26 They mounted up to heaven; they went down to the depths;
their courage melted away in their evil plight;
27 they reeled and staggered like drunken men
and were at their wits’ end.
28 Then they cried to the Lord in their trouble,
and he delivered them from their distress.
29 He made the storm be still,
and the waves of the sea were hushed.
30 Then they were glad that the waters were quiet,
and he brought them to their desired haven.
31 Let them thank the Lord for his steadfast love,
for his wondrous works to the children of man!
32 Let them extol him in the congregation of the people,
and praise him in the assembly of the elders.

33 He turns rivers into a desert,
springs of water into thirsty ground,
34 a fruitful land into a salty waste,
because of the evil of its inhabitants.
35 He turns a desert into pools of water,
a parched land into springs of water.
36 And there he lets the hungry dwell,
and they establish a city to live in;
37 they sow fields and plant vineyards
and get a fruitful yield.
38 By his blessing they multiply greatly,
and he does not let their livestock diminish.

39 When they are diminished and brought low
through oppression, evil, and sorrow,
40 he pours contempt on princes
and makes them wander in trackless wastes;
41 but he raises up the needy out of affliction
and makes their families like flocks.
42 The upright see it and are glad,
and all wickedness shuts its mouth.

43 Whoever is wise, let him attend to these things;
let them consider the steadfast love of the Lord. (ESV)

6 A fool’s lips walk into a fight,
and his mouth invites a beating.
7 A fool’s mouth is his ruin,
and his lips are a snare to his soul.
8 The words of a whisperer are like delicious morsels;
they go down into the inner parts of the body.
9 Whoever is slack in his work
is a brother to him who destroys. (ESV)

37 As Paul was about to be brought into the barracks, he said to the tribune, “May I say something to you?” And he said, “Do you know Greek? 38 Are you not the Egyptian, then, who recently stirred up a revolt and led the four thousand men of the Assassins out into the wilderness?” 39 Paul replied, “I am a Jew, from Tarsus in Cilicia, a citizen of no obscure city. I beg you, permit me to speak to the people.” 40 And when he had given him permission, Paul, standing on the steps, motioned with his hand to the people. And when there was a great hush, he addressed them in the Hebrew language, saying:

22:1 “Brothers and fathers, hear the defense that I now make before you.”

2 And when they heard that he was addressing them in the Hebrew language, they became even more quiet. And he said:

3 “I am a Jew, born in Tarsus in Cilicia, but brought up in this city, educated at the feet of Gamaliel according to the strict manner of the law of our fathers, being zealous for God as all of you are this day. 4 I persecuted this Way to the death, binding and delivering to prison both men and women, 5 as the high priest and the whole council of elders can bear me witness. From them I received letters to the brothers, and I journeyed toward Damascus to take those also who were there and bring them in bonds to Jerusalem to be punished.

6 “As I was on my way and drew near to Damascus, about noon a great light from heaven suddenly shone around me. 7 And I fell to the ground and heard a voice saying to me, ‘Saul, Saul, why are you persecuting me?’ 8 And I answered, ‘Who are you, Lord?’ And he said to me, ‘I am Jesus of Nazareth, whom you are persecuting.’ 9 Now those who were with me saw the light but did not understand the voice of the one who was speaking to me. 10 And I said, ‘What shall I do, Lord?’ And the Lord said to me, ‘Rise, and go into Damascus, and there you will be told all that is appointed for you to do.’ 11 And since I could not see because of the brightness of that light, I was led by the hand by those who were with me, and came into Damascus.

12 “And one Ananias, a devout man according to the law, well spoken of by all the Jews who lived there, 13 came to me, and standing by me said to me, ‘Brother Saul, receive your sight.’ And at that very hour I received my sight and saw him. 14 And he said, ‘The God of our fathers appointed you to know his will, to see the Righteous One and to hear a voice from his mouth; 15 for you will be a witness for him to everyone of what you have seen and heard. 16 And now why do you wait? Rise and be baptized and wash away your sins, calling on his name.’

17 “When I had returned to Jerusalem and was praying in the temple, I fell into a trance 18 and saw him saying to me, ‘Make haste and get out of Jerusalem quickly, because they will not accept your testimony about me.’ 19 And I said, ‘Lord, they themselves know that in one synagogue after another I imprisoned and beat those who believed in you. 20 And when the blood of Stephen your witness was being shed, I myself was standing by and approving and watching over the garments of those who killed him.’ 21 And he said to me, ‘Go, for I will send you far away to the Gentiles.’”

22 Up to this word they listened to him. Then they raised their voices and said, “Away with such a fellow from the earth! For he should not be allowed to live.” 23 And as they were shouting and throwing off their cloaks and flinging dust into the air, 24 the tribune ordered him to be brought into the barracks, saying that he should be examined by flogging, to find out why they were shouting against him like this. 25 But when they had stretched him out for the whips, Paul said to the centurion who was standing by, “Is it lawful for you to flog a man who is a Roman citizen and uncondemned?” 26 When the centurion heard this, he went to the tribune and said to him, “What are you about to do? For this man is a Roman citizen.” 27 So the tribune came and said to him, “Tell me, are you a Roman citizen?” And he said, “Yes.” 28 The tribune answered, “I bought this citizenship for a large sum.” Paul said, “But I am a citizen by birth.” 29 So those who were about to examine him withdrew from him immediately, and the tribune also was afraid, for he realized that Paul was a Roman citizen and that he had bound him.

30 But on the next day, desiring to know the real reason why he was being accused by the Jews, he unbound him and commanded the chief priests and all the council to meet, and he brought Paul down and set him before them.

23:1 And looking intently at the council, Paul said, “Brothers, I have lived my life before God in all good conscience up to this day.” 2 And the high priest Ananias commanded those who stood by him to strike him on the mouth. 3 Then Paul said to him, “God is going to strike you, you whitewashed wall! Are you sitting to judge me according to the law, and yet contrary to the law you order me to be struck?” 4 Those who stood by said, “Would you revile God’s high priest?” 5 And Paul said, “I did not know, brothers, that he was the high priest, for it is written, ‘You shall not speak evil of a ruler of your people.’”

6 Now when Paul perceived that one part were Sadducees and the other Pharisees, he cried out in the council, “Brothers, I am a Pharisee, a son of Pharisees. It is with respect to the hope and the resurrection of the dead that I am on trial.” 7 And when he had said this, a dissension arose between the Pharisees and the Sadducees, and the assembly was divided. 8 For the Sadducees say that there is no resurrection, nor angel, nor spirit, but the Pharisees acknowledge them all. 9 Then a great clamor arose, and some of the scribes of the Pharisees’ party stood up and contended sharply, “We find nothing wrong in this man. What if a spirit or an angel spoke to him?” 10 And when the dissension became violent, the tribune, afraid that Paul would be torn to pieces by them, commanded the soldiers to go down and take him away from among them by force and bring him into the barracks.

11 The following night the Lord stood by him and said, “Take courage, for as you have testified to the facts about me in Jerusalem, so you must testify also in Rome.” (ESV)

6:1 Children, obey your parents in the Lord, for this is right. 2 “Honor your father and mother” (this is the first commandment with a promise), 3 “that it may go well with you and that you may live long in the land.” 4 Fathers, do not provoke your children to anger, but bring them up in the discipline and instruction of the Lord.

5 Slaves, obey your earthly masters with fear and trembling, with a sincere heart, as you would Christ, 6 not by the way of eye-service, as people-pleasers, but as servants of Christ, doing the will of God from the heart, 7 rendering service with a good will as to the Lord and not to man, 8 knowing that whatever good anyone does, this he will receive back from the Lord, whether he is a slave or free. 9 Masters, do the same to them, and stop your threatening, knowing that he who is both their Master and yours is in heaven, and that there is no partiality with him.

10 Finally, be strong in the Lord and in the strength of his might. 11 Put on the whole armor of God, that you may be able to stand against the schemes of the devil. 12 For we do not wrestle against flesh and blood, but against the rulers, against the authorities, against the cosmic powers over this present darkness, against the spiritual forces of evil in the heavenly places. 13 Therefore take up the whole armor of God, that you may be able to withstand in the evil day, and having done all, to stand firm. 14 Stand therefore, having fastened on the belt of truth, and having put on the breastplate of righteousness, 15 and, as shoes for your feet, having put on the readiness given by the gospel of peace. 16 In all circumstances take up the shield of faith, with which you can extinguish all the flaming darts of the evil one; 17 and take the helmet of salvation, and the sword of the Spirit, which is the word of God, 18 praying at all times in the Spirit, with all prayer and supplication. To that end keep alert with all perseverance, making supplication for all the saints, 19 and also for me, that words may be given to me in opening my mouth boldly to proclaim the mystery of the gospel, 20 for which I am an ambassador in chains, that I may declare it boldly, as I ought to speak.

21 So that you also may know how I am and what I am doing, Tychicus the beloved brother and faithful minister in the Lord will tell you everything. 22 I have sent him to you for this very purpose, that you may know how we are, and that he may encourage your hearts.